Proposed in a white paper in 2016, the Lightning Network (LN) is a layer-2 solution built on top of Bitcoin. LN was created in response to scalability issues with Bitcoin, namely the speed and cost of Bitcoin transactions.

Bitcoin’s current theoretical maximum transactions per second (TPS) is 10, though in reality it is between 3 and 7. Contrast this with traditional payment processors like VISA, which handled on average 6,000 TPS in 2020 (based on VISA’s claim of 188 billion transactions a year).

Bitcoin’s transaction fees can vary wildly depending on the current demand to use the network. For instance, on April 20th 2021 average transaction fees were in excess of $50, while on August 9th 2021, the average was around $2.50. For large transactions, such as bank transfers or international remittance, Bitcoin’s speed and cost is comparable or superior to alternatives. But if Bitcoin is to be used for everyday payments (so-called micro-transactions, e.g., a cup of coffee, gas), the transaction speed must increase and transaction costs must decrease drastically.

To understand how LN works, and the current challenges of LN, we need to talk about Bitcoin. The limiting factor of the Bitcoin network is that every transaction must be put in a new block on chain. Since blocks are added to the chain approximately every 10 minutes, there is a hard limit to the number of transactions possible without significantly altering the Bitcoin protocol.

Debates on major reworkings of the Bitcoin protocol have happened before and resulted in 'hard forks,' most notably the creation of Bitcoin Cash. The Lightning Network, rather than creating a new blockchain, is a layer-2 solution. This means that it allows the Bitcoin protocol to remain relatively unchanged, but provides the benefits major reworkings could bring -- in theory, at least.

When one or both wish to close the channel, a closing transaction is sent to the blockchain with the final balances of Alice and Bob. In this case, Alice’s final balance is 11 BTC and Bob’s is 4 BTC. 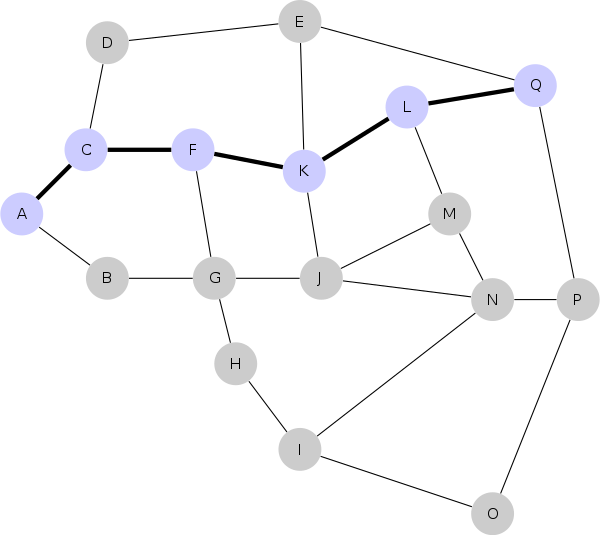 Node A transacts with node Q despite only having direct payment channels with nodes C and B.

LN is a new protocol still in the testing phase. As such, it is faced with many challenges ranging from usability to security.

There are concerns about how easy it is to run a LN node. For LN to be successful, it requires a robust network of Bitcoin nodes running the LN protocol. Running a LN node can be quite difficult and it could be the case that there are payment incentive problems for running smaller nodes. It can be argued that running LN is not too much more difficult than running a full bitcoin node, though. However, since LN is mostly targeted at micro-transactions, the day-to-day experience with LN will be through LN-enabled wallets. LN-enabled wallets are not very user friendly, and most of these wallets caution that since they are still in public testing stages, it is advisable to not deposit too much funds. Unlike some of the more established Bitcoin wallets, the newness of these LN-enabled wallets means there are tradeoffs between custodial and non-custodial versions. The non-custodial LN wallets are harder to use -- more confusing, less straightforward. The custodial options are easier to use, but you must rely on a third-party with your Bitcoin.

Read more: Understand the difference between custodial and non-custodial wallets, and how it relates to economic freedom.

LN must also contend with competitors. As of August 2021, LN has locked up approximately 2,300 BTC. This might sound like a lot, but by comparison, Bitcoin has been locked up on Ethereum (WBTC, wrapped Bitcoin) to the tune of 250,000 BTC. Since block times on Ethereum are approximately every 14 seconds as opposed to Bitcoin’s 10 minutes, it already is much faster to transact Bitcoin via WBTC on the Ethereum network. Further, it's conceivable that Ethereum projects like ETH 2.0 and Ethereum Plasma will make the Lightning Network unnecessary and obsolete. It’s also important to remember that using WBTC brings with it all of the massive benefits of access to DeFi, which LN does not.

Lastly, and most worryingly, LN has been faced with a number of vulnerabilities. These include:

Work yet to be done

The Lightning Network of today is faced with many challenges, but the protocol is still relatively young and these kinds of issues are to be expected. Lightning developers will continue to improve the protocol and hopefully will be able to solve the issues to help scale Bitcoin on layer-2.

Read more: Understand the differences between Bitcoin and Bitcoin Cash, and why Bitcoin Cash is largely serving a different use case.

For a sober 10,000 foot assessment of the Lightning Network, written by a full-time Bitcoin Core contributor nonetheless, check out Antoine Riard’s excellent post.

Sending bitcoin is as easy as choosing the amount to send and deciding where it goes.