You might have heard people excitedly talking about “airdrops” in crypto related chats or on social media. It’s likely that people who often use crypto projects and platforms will receive an airdrop at some point. In this article, we will talk about what exactly an airdrop is, why so many projects are using them, and some well known examples.

An airdrop is when a project takes a certain amount of the project's cryptoassets and sends them for free to people who meet particular requirements. That definition might sound vague, but that’s because airdrops are used in a wide variety of ways. It’ll be easier to understand with examples. Airdrops can be split into two broad categories: tokens and NFTs. Let’s look at an example of each:

Token airdrop: A crypto platform, such as a decentralized exchange (DEX), decides to create a native token. To reward its current user base, the project sends half of the total token supply to users’ wallets based on the volume each user has traded on the platform. This token acts as a moat of sorts, helping to retain users from competitors.

Read more: What is a DEX?

Read more: What are NFTs?

Why have an airdrop?

Airdrops help projects become more valuable. Here are a couple of the many ways they can do this:

Airdrops are used to strengthen a project’s community. They can give users a stake in the project’s success, which encourages those users to contribute in any way possible to the growth of the project. Airdrops are also often a way to reward early users, a sort of “thank you” which creates additional loyalty.

Airdrops are a great way to market a project. Airdrops can attract a lot of attention, raising awareness of a project’s products and services.

Airdrops tend to use the same metrics to determine who receives the airdrop, though every project uses them differently.

Usage: Projects must check if a user possesses a cryptoasset, or has used a crypto platform. The simplest version of this is providing a wallet address to a project. If you have a wallet address, input it and receive an airdrop! This sort of airdrop has fallen out of favor, because it tends to attract more speculative people with a shorter time horizon. Not ideal for building a long lasting community.

Instead, airdrops now favor metrics that target people with a longer time frame preference. For NFTs, if you already have a certain NFT in your wallet, that might qualify you for a future NFT airdrop. Token-based airdrops often look at how much a user uses a platform. There will usually be a threshold that determines if and how much of the airdrop you qualify for. For example, if you traded more than 1 ETH, you qualify.

Date: There will always be a “snapshot.” The snapshot is the time at which the project determines qualification for the airdrop. Any new data after that point will not count for the airdrop. Projects might also specify a starting date too, such as usage one year prior to the snapshot, although it could also be lifetime usage.

This is a classic example of using an airdrop to jumpstart the number of users for a crypto project. LOOKS is the reward and utility token of the NFT trading platform, LooksRare, on Ethereum. LooksRare entered an already crowded space, with the incumbent Opensea capturing an overwhelming majority of NFT trading volume. To incentivize people to start using the new up-start instead, LooksRare airdropped 12% of LOOKS total supply to anyone with a combined 3 ETH trading volume or more on Opensea for the six months prior to the snapshot (June – December 2021). The airdrop worked:

LooksRare has been able to maintain a healthy amount of volume compared to incumbent OpenSea. This is despite being only 4 months old from the time the above picture was taken. It should be noted that some percentage of LooksRare’s volume is likely artificial, but the above graph attempts to remove that volume. Even if LooksRare’s volume is actually half of what is shown, it still would be impressive.

Read more: What is UNI?

Read more: What is liquidity?

This trend was reversed when Uniswap airdropped 400 UNI tokens to each wallet that had used its exchange. In this case, the airdrop was initially used to defend the protocol – successfully so. In the below image you can see how Uniswap’s total value locked (TVL), a key metric for the liquidity of a DEX, suddenly decreased before rebounding much higher. The catalyst of the rebound was when Uniswap launched UNI, airdropping it to Uniswap users. 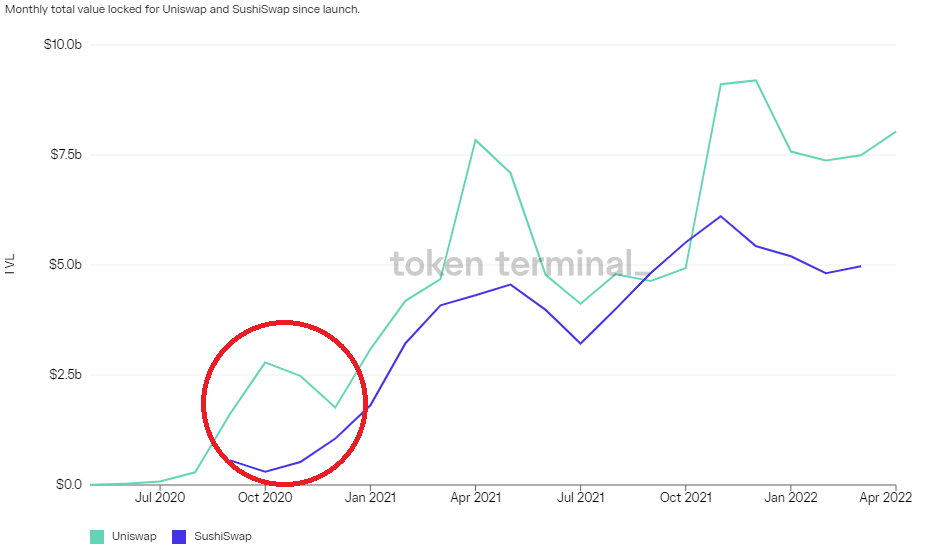 Successful NFT project, Bored Apes Yacht Club (BAYC), rewarded BAYC NFT holders with an exciting airdrop. For every BAYC in your wallet, you were given a “Serum” NFT. That Serum could be exposed to a BAYC, making a MAYC. Serums came in three levels of rarity, M1, M2, and Mega Mutant. The Serum airdrop was a brilliant marketing move because it not only rewarded the community, but became a compelling story for non-holders to follow. As you can see from the below graph, the August 2021 MAYC airdrop precipitated a spike in BAYC value.