What is a token sale?

This article is part of series educating people on token sales in the lead up the launch of VERSE, Bitcoin.com’s rewards and utility token, and the world’s gateway to DeFi. The VERSE token sale sale will go live on November 1st. Only registered applicants are eligible to purchase in the sale. To register, please visit getverse.com.

A token sale, sometimes called an Initial Coin Offering (ICO), is the first stage of a token offering, where a group of buyers become the first to reserve a portion of the project’s token supply.

Token sales may serve one or more of the following functions:

Buying in a token sale typically entails registration or “whitelisting” via the project’s website. This often involves a Know-Your-Customer (KYC) procedure, where buyers are filtered to ensure the token sale complies with local regulations. Whitelisted buyers are eligible to purchase in the sale when it goes live and orders are typically accepted on a first-come, first-serve basis.

Major cryptocurrencies such as Bitcoin, Ethereum, and U.S. dollar stablecoins like USDT and USDC are the most common methods of payment for token sales. In some cases, payment is accepted in local currencies like dollars or euros.

Funds received in a token sale are often converted to U.S. dollar stablecoins and held in the project’s treasury. From there, the funds are used to pay project-related expenses such as compensation for developers, bounties for project-related tasks, marketing, and so on.

The tokens made available to buyers in a token sale are usually just a portion of all the tokens that will ultimately be issued by the project. For example, a token sale may offer 20% of the planned total supply of tokens. The remaining 80% may be reserved for team members, a development fund, airdrops, ecosystem incentives, and more. Note that some projects, such as Ethereum, don’t have a pre-defined token supply. In that case, the amount allocated in the token sale can’t be expressed as a percentage of the token supply.

Token sales come in a wide variety of shapes and sizes, and have evolved significantly over time. The best token sales are typically structured to consider ways to:

The following are some common features that have evolved as ways to achieve the above:

Mastercoin is credited as the first token sale, being held in July 2013. A utility token for a supplementary protocol to Bitcoin, the Mastercoin token sale raised about $500 thousand, paid entirely in BTC.

The Ethereum token sale, held in 2014, was the biggest token sale up to that point. It raised approximately $18.3 million, also paid in BTC.

Late 2017 marked the start of the so-called ICO boom, where hundreds of projects conducted hastily constructed token sales, raising the equivalent of billions of dollars, often paid in ETH. Many of those projects never followed through on the claims laid out in their white papers, leaving buyers with tokens that had little or no utility or liquidity.

The following is a list of the top-10 biggest token sales by amount contributed: 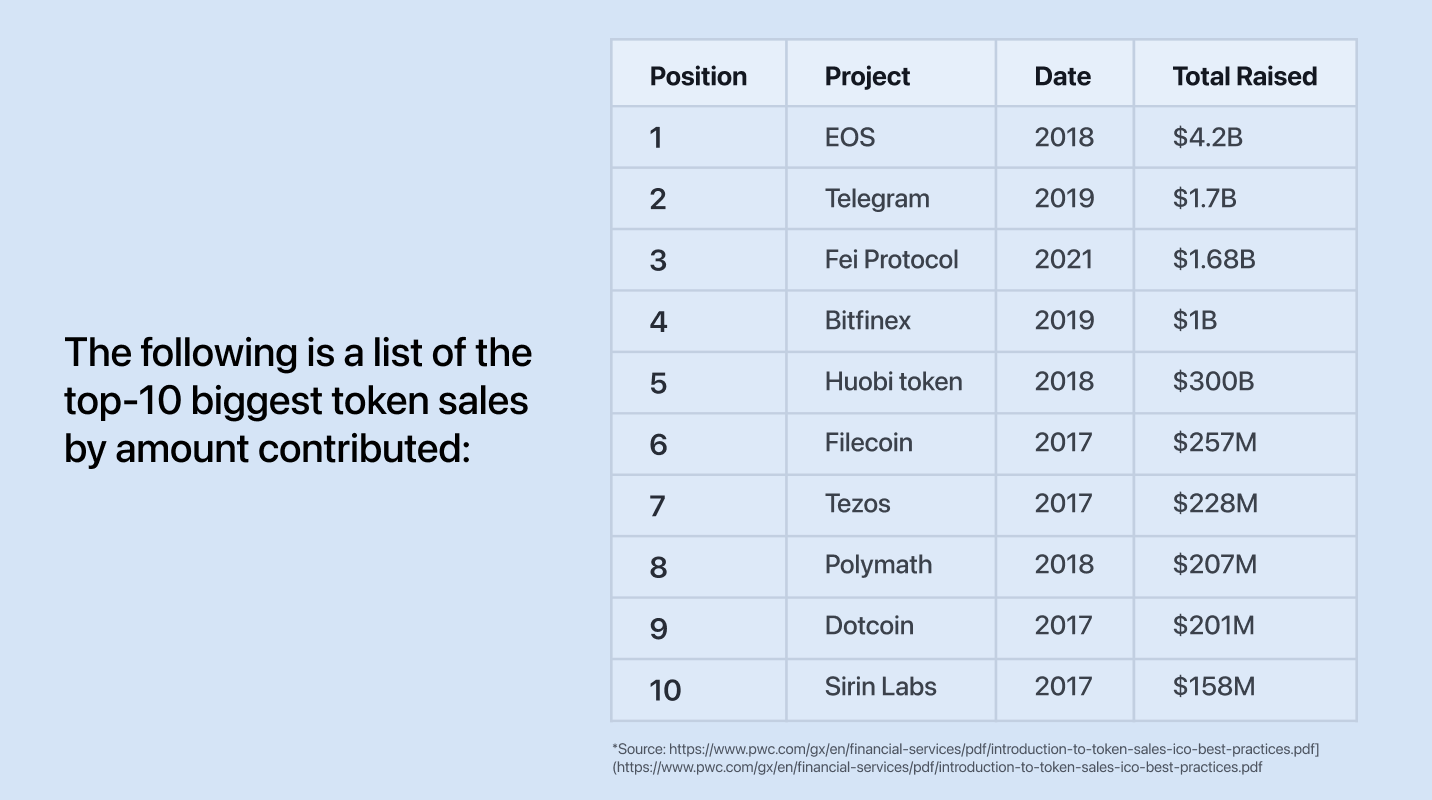 In many cases, participation in a token sale has been extremely lucrative. Let’s look at some notable examples:

Bitcoin is based on the ideas laid out in a 2008 whitepaper titled Bitcoin: A Peer-to-Peer Electronic Cash System.

Airdrops are very popular in crypto. Find out what airdrops are, why they are used, and some well known examples.

What are transaction fees?

Learn about transaction fees, including why they exist and how they work.

Decentralized Finance (DeFi) is bringing access to financial products to everyone. In this article we examine some prominent use cases.

Read this article →
Start from here →