Is Bitcoin a store of value?

There are many reasons to be interested in Bitcoin - and we outline the most common ones here - but it is undeniably the price that attracts the most attention. This is natural because people are always looking for ways to grow their wealth.

Bitcoin has so far proven itself a spectacular way to grow wealth over time. With an annualized return of 230% over the last decade, it performed 10 times better than the Nasdaq 100. But Bitcoin has also suffered from high volatility. For example, in 2014, it lost 58% of its value. In 2018, it dropped by 73%. Further, just because Bitcoin has performed well over the last decade, there's no guarantee it will continue to do so.

In recent years, the meme that Bitcoin may work as a "store of value" has gained traction. This has led to more and more people buying Bitcoin with the intention of holding it for a medium-to-long period. In this article, we will explore the store-of-value meme as it relates to Bitcoin, looking at the key arguments for and against it.

What does store of value mean?

Broadly speaking, a store of value is any object that retains purchasing power into the future, and can be readily exchanged for something else. In other words:

This creates some constraints on good stores of value. A good store of value should not have a very short lifespan, like flowers or milk. It should also be reasonably liquid, which is a measure of how easy or difficult it is to exchange. For example, it’s much easier and faster to exchange a bar of gold for money, than it is to exchange a house for money. Put another way, gold is more ‘liquid’ than real estate. If no one will exchange your store of value for something else of value, then your store of value is effectively worthless. Finally, stores of value should be relatively scarce, or hard to obtain. Air is vitally important, yet its abundance makes it worthless as a store of value.

Traditional examples of store of value

Some of the most common stores of value are fiat currency, precious metals, real estate, and property.

Fiat currencies such as the dollar, euro, and yen, are the most familiar stores of value for most people, since we handle them every day. They are extremely liquid, highly useful for daily transactions, and accepted everywhere. Fiat currencies are common stores of value in part because of the trust for the financial systems that back them. Perhaps the greatest advantage of fiat currencies as a store of value is that nation-states sanction them and decree that everyone must use them to pay taxes, settle debts, and so on. However, this advantage also comes with its downsides. When poorly managed by the nation-states that issue them, fiat currencies are subject to inflation, in which case the money’s store of value decreases. Hyperinflation, while rare, results in the complete collapse of the value of a fiat currency. Hyperinflation tends to be driven by a combination of poor economic policy, complex geopolitical conditions, and excessive money printing.

Precious metals like gold and silver have been used as a store of value throughout history due to their relative scarcity, ease of transaction, utility, and liquidity. Precious metals are rare compared with other natural minerals. This means that people must spend significant resources obtaining them by, for example, digging them out of the earth and refining them. While not as easy to transact with as fiat in the modern era, metals such as gold are much easier to transact with than land or property: You generally can't pay for things directly with gold or silver anymore, but it's still easy enough to exchange them for cash. This makes gold and silver highly liquid assets. Precious metals also have utility in many industries, including the electronics as well as jewelry industry. All of these factors combine such that precious metals rarely lose value over long enough time frames. In other words, they are objectively good stores of value. However, over shorter time frames, they also usually are outperformed by other stores of value. This makes them a relatively conservative object to store value in from an investment perspective.

Real estate and property, like precious metals, have a long history as a store of value. Land and certain objects (think famous paintings, historical documents, collectible comic books, etc.) have proven to hold their value well. Their scarcity is unparalleled, often singular. The biggest weakness of land and property is the liquidity. These are illiquid stores of value. Everyone knows how time consuming and difficult it is to purchase a home. The transaction is measured in months. One-of-a-kind property can take years to find a willing buyer. The fact that the value of the object is so hard to exchange actually makes the object less valuable. All of this means that real estate and property tend to function as good stores of value primarily for the wealthy.

The store-of-value argument against Bitcoin

While Bitcoin has performed very well as an asset, for some people its relatively young age means it shouldn’t be considered a store of value. The other stores of value discussed above have a much longer record of being viable stores of value.

Another strike against Bitcoin as a store of value is that, in short time frames, it is incredibly volatile by comparison to the other stores of value described here. Massive 50%+ drawdowns are not uncommon in Bitcoin while for other stores of value, price swings tend to be much more gradual. This level of volatility is off putting for risk averse people.

Moving onto scarcity, a key store-of-value characteristic, Bitcoin is scarce, but critics point out that the programming code of Bitcoin is open source and anyone is free to create an exact copy of Bitcoin and release it to the world. In fact, many people have done this over the years. Thus, some people claim Bitcoin’s scarcity is not real, but artificial.

Finally, many claim that Bitcoin is an antiquated technology; a stepping stone to a more technologically mature cryptocurrency that solves Bitcoin’s flaws. Here the argument is that Bitcoin will not stand the test of time as a store of value but rather will be replaced by, for example, another cryptocurrency.

The store-of-value argument for Bitcoin

There is no denying the newness of Bitcoin, but that newness can also be considered a strength. To give an example, 14 years ago, the first smartphone was released (iPhone). A mere 14 years later, smartphones are ubiquitous around the world. Smartphones allowed people to do old things (browsing the Internet, taking pictures, communicating) in new, better ways. Bitcoin is doing that, but for money and finance. Bitcoin, like many new and disruptive things, is volatile, but if you zoom out it has only gone up -- massively. Indeed, it is the best performing liquid asset in the last decade.

As mentioned, critics of Bitcoin point out that it is artificially scarce, so it is worthless. Yet, plenty of stores of value are artificially scarce. In fact, fiat currency, one of the primary stores of value, is artificially scarce! Governments can always print more, and they often do, but in general they don’t because they want the currency to be relatively scarce. Yet while central banks can reduce the scarcity of fiat currencies at will, Bitcoin’s scarcity is set in stone. There are only 21 million possible bitcoins, and a not insignificant portion of that is lost forever.

It is true that Bitcoin’s technology is not as cutting-edge as other cryptocurrencies, but this can also be seen as a benefit. While newer technologies are likely to have flaws and exploits, Bitcoin is hands down the most battle-tested decentralized network in the world. It has functioned, without downtime, 24/7 since launching in 2009.

Bitcoin is a reasonably liquid asset, and its liquidity is improving by huge percentages every year. Bitcoin is already much easier to transact with than gold, though less easy than fiat currency. Every year more businesses start accepting bitcoin as a viable payment method, which means Bitcoin is developing greater utility. It is currently used for international remittance, and recently has been accepted by some governments as a form of legal tender.

Another important factor contributing to Bitcoin's potential as a store of value derives from its decentralized and purely digital nature. Because Bitcoin is simultaneously everywhere and nowhere, it's difficult to seize or steal yet trivially easy to "take with you." This empowers people to store value independently of third parties, whether they be banks or nation-states, and it eliminates the associated third-party risks. For example, people storing fiat in the bank run the risk that the bank will default or otherwise restrict access to their funds. The same goes for certificates representing gold held in a centralized vault. And while it's true that all of the stores of value discussed in this article can also be stored independently from third parties, the fact that they are physical objects makes storing and moving them inherently more difficult than Bitcoin. While the other stores of value require heavy duty security and are risky or costly to move, Bitcoin - whether it be $100 worth or $100 million dollars worth - can be stored and accessed with little more than a memorized password (and with shared wallets, the single-point-of-failure risk can be mitigated).

The following chart is an attempt to compare Bitcoin to fiat money, gold, and real estate across a range of characteristics that broadly contribute to each assets’ overall utility as a store as a value: 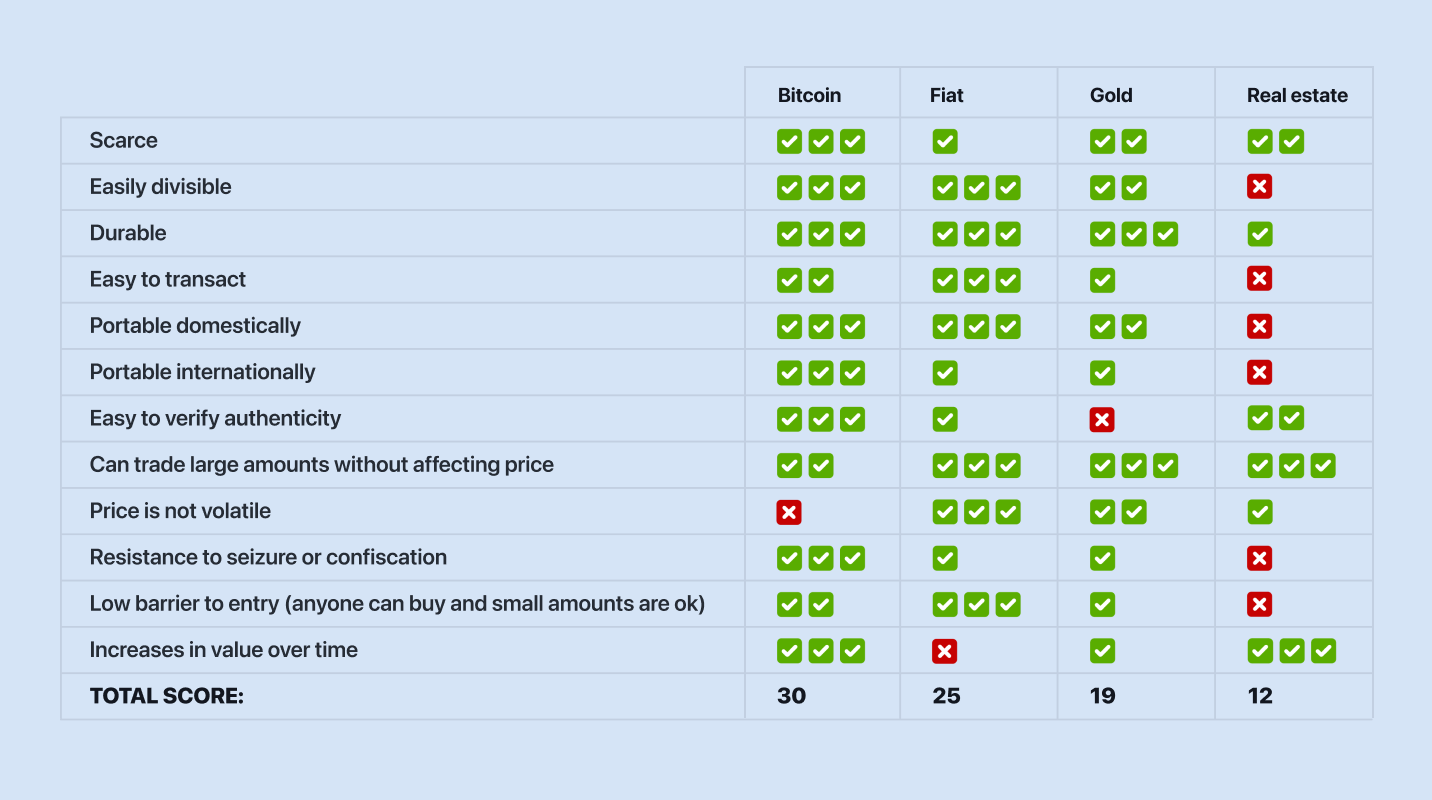 Using Bitcoin as a store of value

If you want to use Bitcoin as a store of value, what should you do?

Well, just like if you view dollars, gold jewelry, or collectible comic books as a store of value, you should approach Bitcoin as a way to preserve and perhaps create wealth. Here are some articles that can help you on this powerful journey to financial freedom:

Bitcoin is based on the ideas laid out in a 2008 whitepaper titled Bitcoin: A Peer-to-Peer Electronic Cash System.

How does bitcoin exchange work?

How do bitcoin transactions work?

What is bitcoin mining?

The process of minting new bitcoins is in some ways similar to the process of extracting precious metals from the earth. For this reason, it has come to be known as 'bitcoin mining.'

As Bitcoin has become more mainstream, concerns about its environmental impact have become more numerous and pressing. Unfortunately, some of the recent criticisms have misrepresented the facts.

Learn about the issuance rate of ETH and how it's governed.

Learn about the key US-dollar crypto 'stablecoins,' how they remain stable, what they're used for, ways to earn interest on them, and where to get them.

Read this article →
Start from here →