What is the metaverse?

Over time, the internet has gotten progressively more intuitive and interactive. The early internet was almost entirely text based, with hyperlinks used to navigate between text pages. Over time it became more graphical until internet applications such as Gmail, Facebook, Instagram, etc, became the norm. All of this progress still has happened on screens (2-dimensional surfaces), but humans live in a 3-dimensional world.

The term metaverse was created by Neal Stephenson in his 1992 novel Snow Crash. In the novel, the metaverse is a virtual reality world, that according to Wikipedia, “appears to its users as an urban environment, developed along a single hundred-meter-wide road, the Street, that runs around the entire 65,536 km circumference of a featureless, black, perfectly spherical planet.” The metaverse is experienced from a first-person perspective via virtual reality goggles.

Pieces of the metaverse have existed up to this point. Below we go over a couple of these proto-metaverses.

Social network platforms like Facebook, YouTube, and TikTok are not often thought of as proto-metaverses, but they are. Facebook is basically a mini-internet onto itself. While it is not graphically immersive, Facebook content has become increasingly image based. Facebook is in the process of becoming graphically immersive by pivoting hard into the metaverse, even going as far as rebranding as Meta. YouTube and TikTok are both social networks with a main emphasis on video, which is way more immersive than text.

What is the metaverse?

The metaverse needs three equally important components: immersive graphical interfaces, interconnected networks, and cryptoassets. Where two circles overlap, you get an incomplete metaverse. Only when all three overlap in the center do you get a fully formed metaverse. Let’s look at all of the different categories and overlaps. 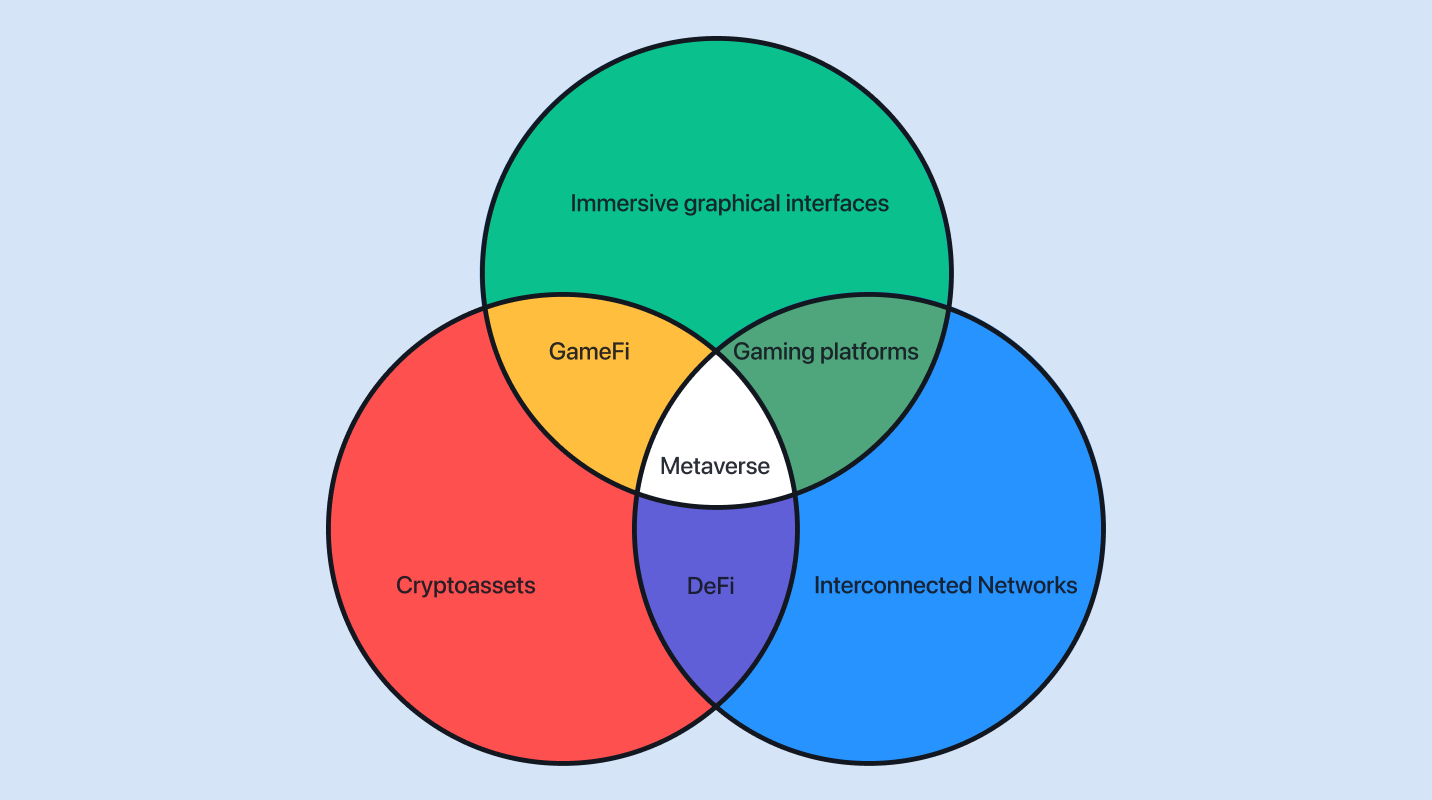 Immersive graphical interfaces: Many articles explaining the metaverse claim that virtual or augmented reality are necessary for a metaverse. This is simply not true. If that technology matures enough to be as integral to life as a smartphone, virtual or augmented reality might become the accepted way to interact in the metaverse, but it doesn’t have to be. Plenty of 3D games provide an immersive gaming experience.

Cryptoassets: Cryptocurrencies and other digital assets provide a money layer as well as a way to create digital scarcity. Digital scarcity suddenly makes it possible to have online digital ownership, a crucial component of a persistent world online. Digital ownership allows people to traverse the disparate networks that make up the current internet while maintaining a cohesive self-custodied personality.

GameFi: A cross between immersive graphical interfaces and cryptoassets, GameFi are games that integrate cryptoassets into the game mechanic loop. The first breakout category of games from this mix are Play-to-earn (P2E) games, such as Axi Infinity. GameFi is still very young, and most of the games seem less about having fun, and more about making money. Expect this to change over time as more traditional game companies get involved. Games have become more and more a social experience, and one that has over time pushed more and more into the physical world. Practically every game made these days has a multiplayer component, or it fails outright. Games like Pokemon Go! require traversing the physical world in order to play. Expect this trend to accelerate in the metaverse.

Gaming platforms: A mix of immersive graphical interfaces and interconnected networks yields things like gaming platforms and MMORPGs. Platforms like Steam and Epic Game Store are less graphically immersive, but very interconnected. This is changing with things like Steam’s VR interface. They include PC, MAC, and mobile networks, featuring thousands of games, a social network, review sites, and individual stores. MMORPGs are very immersive graphical interfaces to fantastical worlds. Games such as World of Warcraft and EVE Online are feature rich worlds. EVE Online especially could count as a gaming platform as it features a complex economy.

Metaverse: Combine immersive graphical interfaces, interconnected networks, and cryptoassets, you get the future of the internet. An internet much like the one we have now, but with more personal power, naturally intuitive interfaces (for humans), and the place that more and more will intrude on the physical world.

How does crypto fit into the metaverse?

Crypto was the last missing component of the metaverse. Crypto introduced the idea of digital scarcity, which enables digital ownership. Many components of crypto will play pivotal parts in the metaverse.

Asset management: Using crypto wallet software, you can self-custody your online data and digital assets. As of right now, each internet-based company owns your data. This includes text and photos, but also things like your social graph — the unique mesh of connections and reputation you’ve built up on that service. You might be able to download your text and data, but the social graph is non-transferable. These internet companies do not interoperate, so your online presence is fragmented and uneven across all of the various internet platforms. Crypto asset management allows you to control your data and use it across any service that supports it.

Controlling your data is very important when that data takes the form of cryptoassets, which can be worth tens, or hundreds, or millions of dollars!

Cryptocurrencies: Cryptoassets that are money-like, for example Bitcoin and stablecoins, will be an important part of an online-first economy. Games like Eve Online or services like Steam have money-like digital assets, but the “money” is controlled one hundred percent by the company. The company can create, destroy, or revoke that money whenever they want. On top of that, the company can go bankrupt, or decide to deprecate the game in favor of a sequel. Cryptocurrencies are widely accepted outside of one companies’ ecosystem. They are also cross-border.

NFTs: NFTs allow you to self-custody your digital assets — from clothes and weapons for your avatar, to pieces of real estate in virtual worlds. They can represent digital art such as photos, music, and videos. They can even act as tickets to special invite-only virtual worlds, games, guilds, and communities. People are only just beginning to explore how to use NFTs. Just like with the internet in the 90s, it’s difficult to imagine how it will be used ten years in the future.