Unlike Bitcoin, Ethereum's supply schedule wasn't etched in stone from genesis. While for Bitcoin the maximum supply, which is set at 21 million coins, is enshrined as a defining characteristic of the cryptocurrency, there is no upward limit to the total amount of ETH that can be issued. Further, the issuance rate itself is subject to change along Ethereum's governance processes. ​ Read more: How does governance work in Ethereum? ​ Like Bitcoin, Ethereum uses a 'Proof of Work' consensus mechanism (although the hashing algorithm differs). Miners who succeed in extending the Ethereum blockchain by applying computing power to the hashing algorithm are rewarded in ETH, and blocks are added approximately every 10-15 seconds. ​ Read more: What is Proof of Work Bitcoin Mining? ​ When the Ethereum network launched in 2015, the block reward was initially set to 5 ETH. This meant that the out-of-the-gate inflation rate was above 20% on an annual basis. Of course, as the supply increased, inflation decreased (because additional supply had decreasing impact as the total supply grew). After just one year, therefore, the inflation percentage had reduced to the low teens (on annual basis). ​ At block 4,370,000, which was in October 2017, the block reward was reduced to 3 ETH in accordance with Ethereum Improvement Proposal (EIP) 649. At this point, annual inflation was less than 10% - and again, as supply expanded, the relative inflation rate adjusted downward. ​ At block 7,280,000, which was in February 2019, the reward was adjusted downward once again, this time to 2 ETH in accordance with EIP-1234. This initially represented an annual inflation rate of 4.5%. ​ The following chart tracks Ethereum's ETH issuance rate from network genesis, and projects the future issuance rate of ETH as Ethereum transitions away from a Proof of Work to Proof of Stake consensus model in line with the move towards "Ethereum 2.0 ​​ 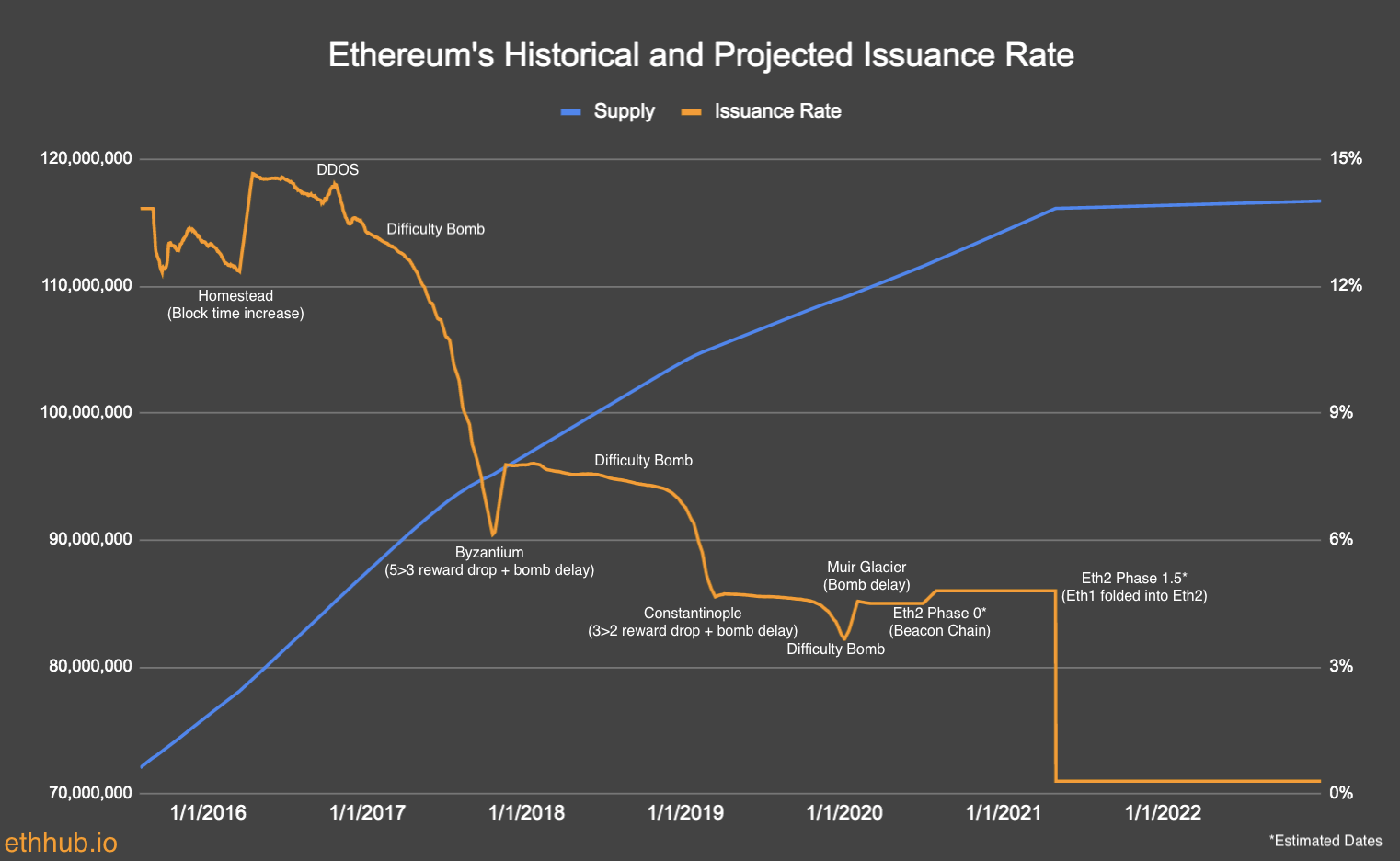 What is ETH used for?

How to buy ETH

How was ETH initially distributed?

What is ETH gas and how do fees work in Ethereum?

How does governance work in Ethereum?

How to create an Ethereum wallet

What is ETH used for?

Understand the function and utility of ETH.

How to buy ETH

Learn how to buy ETH and hold it securely in a digital wallet you control.

Understand the origin and early history of the Ethereum protocol.

How was ETH initially distributed?

Learn about the 2014 crowdsale, the initial distribution of ether (ETH), and why it's important.

Understand the basics of decentralized applications on Ethereum; their features and their limitations.

What is ETH gas and how do fees work in Ethereum?

Transactions in Ethereum are measured by computational effort, and that effort is delineated in 'gas.' One unit of gas is equivalent to 0.000000001 ETH.

Understand how EIP 1559 overhauls the fee market in Ethereum and what it means for ETH's circulating supply.

How does governance work in Ethereum?

Why governance is needed, Ethereum governance in practice, the concept of credible neutrality, and more.

ETH 2.0 is an updrade to Ethereum that aims to increase the speed, efficiency, and scalability of the Ethereum network while not compromising its security or decentralization.

How to create an Ethereum wallet

Creating an Ethereum wallet is as easy as installing software on your mobile device or laptop/desktop.